Indonesia is one of the most famous tropical  land in the world, it lies right in the middle of the world where the line dividing the southern and northern area extends.  There are a total of 12 countries which are traversed by the equator, but only in Indonesia lies a city which precisely divide the northend and southernd earth, the city is Pontianak.
To memorialize the place, in the colonial era the government built a monument called Equator Monument, then slowly it was renovated in a way that it became a famous traveling destination. Even now, a lot of tourists come to this place to merely see the monument as well as to “feel” the shift between northern and southern earth.
On some occasions, there is a chance that the monument lose its shadow, it is when the sun is right above this place in a straight line, it is of course a phenomenon that cannot be found everywhere but here.

Equator Monument is located in Jalan Khatulistiwa, North Pontianak, Kalimantan Barat.  It is approximately 3km from the center of Pontianak. This equator is one of the most visited tourism object in Pontianak. The actual monument itself is actually not quite large, it is now protected by a cupola.
The monument that stands strong outside is the duplicate of the actual monument. The monument itself consists of 4 stakes of iron wood with 0.30 m diameter for each stake.  The front stakes are 3.05m in height where the back ones are around 4.40m  with the arrow that shows the exact location of equator line on top of it.  In this place you can go inside to read the history of the monument, or just shifting through the northern or southern area, the good thing is you can get a certificate showing that you’ve done your “Shifting”. 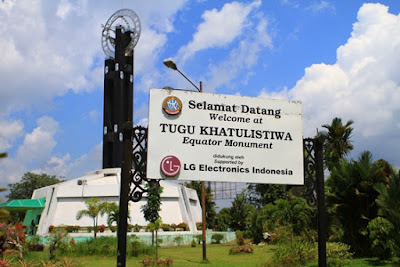 If you want to go there, it is recommended for you to go around 21-23 march or 21-23 September where the sun reach its culmination stage which causes it to be right above the equator line, at that time, the shadow of the monument will vanish for a several moment, since it only lasts for several seconds,  it is a sight to behold.