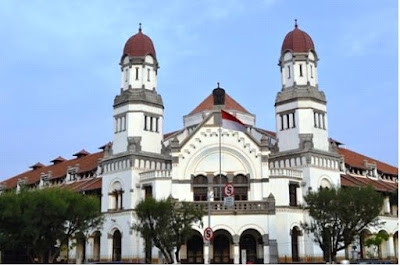 If you are looking for a travelling destination around Central Java, we are sure that most of the local there will point out LawangSewu, the famous landmark in Semarang.
Lawangsewu itself is a building known for its scary myth, actually the place is a colonial era building built around 1919.
The name LawangSewu, which means Thousand Doors doesn’t necessarily means that there are exactly thousand doors there, but it is because of the numerous amounts of arcs and doors as well as around 600 large windows inside it.
Because of its miserable state,  in 2009 Simon Marcus Gower in his article in The Jakarta Post pointed out that the place is “dark and evidently sick. Its white walls are faded throughout; blackened by pollution and neglect”, thus the Governor of Central Java at that time decided to renovate the place and on 2013 it officialy became tourist attractions.
Nevertheless the building is still known as scary and haunted, here we provide some information regarding LawangSewu.

LawangSewu is located at Pemuda Street, Semarang, Central Java. In the first place the building was created  as a headquarters of Dutch East Indies Railway Company, as the time goes it has become a famous travelling destination owned by PT. KeretaApi Indonesia.
It is not hard to find this place since there are lot of road signs pointing out to the place and most local people also know where  LawangSewu is.
Once you arrive there, you will notice that the place is divided into three parts, first is the central area where it is an open air area with a giant trees so you can rest in the shady area.
Second part is the  building that contains pictures of old train from the Dutch era.
The third part is the main attraction which is the main building that contains a lot of doors. The old-style decoration in this place such as decorated window will give your eyes a pleasant view, in this place you are free to walk around but you are prohibited to go into underground area.
There are rumors spreading that the ground area is a sacred place where the famous Indonesian Kuntilanak and Headless Ghost mostly show themselves,  there are some videos showing the appearance of the ghost, but it is up to you whether you want to believe it or not. 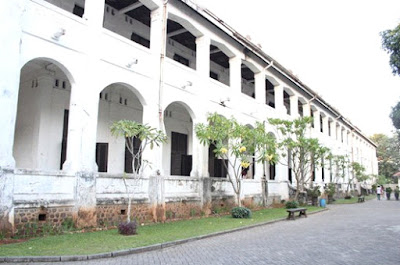 Now after reading about the famous traveling destination LawangSewu, are you interested in going there to see that so-called haunted house?
Sumber:tripadvisor